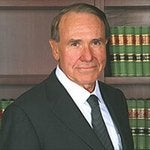 Jim Courter was Congressman for the 12th District of New Jersey. He was a ranking member of the House Arms Services Committee and the Republican Candidate for Governor of New Jersey in 1989. In 1991, President George Bush appointed Jim to be the Chairman of the Defense Base Closure and Realignment Commission.

Mr. Courter is admitted to the practice of law in both New Jersey and Washington, D.C., and is a member of the New Jersey, American, and Warren County Bar Associations, as well as the International Court of Trade.